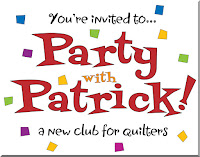 I just got off the phone with Merry Summey, owner of Fiddlesticks Quilts and member of the Party with Patrick™ club and guess what she was doing? She was out buying party hats and balloons to decorate for her kick-off party tomorrow! They're going to be making the St. Pat's Mats free March project and, no doubt, having a great time because these ladies are a kick!

Then, I happened to go to the website for Little Stitches Sewing Center and saw that Linda and Rick and their crew also know how to throw a party. They have the invitation posted right on the home page of their site inviting their customers in for a day of quilting and partying. They're even serving Irish Stew for lunch at their kick-off! What fun-loving quilter could pass up an invitation like that?
If I lived closer, I'd be hopping in the car and going to both of these parties because they know how to CELEBRATE quilting and camaraderie! And those are the kind of people I like to hang out with. But, most of all, those are the kind of shops that are offering their customers what they need right now; a place to get together, make friends, and have fun with fellow quilters being creative. With all of the bad news about the economy and everything else going on, it's refreshing to the spirit to just drop everything once in awhile and have a party!
As I'm writing this, our newest member just signed up and is just excited as everyone else. Thanks and welcome to Liat and Miles of Stitches. I know you'll throw a great party too! Liat has already invited me to party with her and the gang in Hemlock, MI. I'm there!
So the party's gearing up. All it takes to be on the "A" List is the desire to have a good time. If you want to be on the list, make sure you let the quilt shops in your area know you're ready for a party. If you're a shop owner and haven't joined us yet, what are you waiting for? Let's get this party started.
I hope everyone has a great weekend and thanks for checking in on me ;-)
Posted by Patrick and Team at 12:06 PM No comments:

With everything else that's been going on, I almost forgot to tell you all that Sunny-side Up is now available! It's my appliqué pattern for a 20 inch round table topper and a 15 inch round charger-style placemat. This one was a big hit at quilt market and I've had a lot of requests for it so if you're among those who have been waiting, ask for it at your local quilt shop or you can get it here.

Other than that, I've been busy helping shop owners with their Party with Patrick™ club sign-ups and I'm really enjoying our conversations and getting to know them. We're gonna have a fun year for sure.

I've gotten a lot of emails/inquiries about how you can be a part of the club if there isn't a shop in your area that's hosting. What you really need to do is let your local shop(s) know that you want them to be a member shop. Maybe they're just waiting to hear if their customers have an interest...? We've been knocking around the idea of an online club but that's probably down the road a bit.

I'm also finishing up a new fabric line that I'm anxious to tell you about but, in the meantime, check out my new Space Cases collection for kids and kids at heart at Robert Kaufman. It's kooky and colorful.

My next book, Poster Quilts, is on it's way and the one that will follow later this year (still top secret) is making its way through the process at C&T Publishing. The days are definitely full but fun.

There are also more new patterns on the way so keep checking back for updates!

I hope all's well with everyone :)
Posted by Patrick and Team at 4:59 PM No comments:

I have to tell you about the experience I had on Saturday. I was asked to make an appearance at a retreat that Valley of the Sun Quilters Guild was having here in Phoenix. They wanted me to bring a trunk show of my quilts and tell a little bit about what I do. I thought it would be fun and it's always nice to meet fellow quilters but nothing could have prepared me for this group...

The retreat was being held in a local hotel. I wondered why they would choose a hotel instead of somplace more cozy, refined, and bed-and-breakfasty. My wondering would soon be quelled. I expected we would set up and present my show-and-tell in a conference room there. When I was led into the room where this would all take place, I couldn't believe what I saw.

It was like they had taken up some kind of semi-permanent residency in this place that had become a foster home for wayward fabric scraps, sewing machines, and any conceivable sewing and quilting notion to be had. Their quilting projects-in-progress were displayed on every available square inch of wall space. Every stationary object in the room, and some living and breathing objects, were either draped in fabric or covered, beyond recognition, in stray snips of thread. I mistook one of them for a chair. The only word I could think of at the time to describe my first impression of this place was "overwhelming". Looking back, I'm wondering if it wasn't more like what I've heard about shell shock.

I couldn't believe that they were spending 3 or 4 days buried in this kind of "rubble" and "destruction" only a true quilter can create. It's the aftermath of a few days of creative wild abandon when rotary cutters run amok and billions of bits of ten-dollar-a-yard fabric fly in a kind of frenzy that's usually kept behind the closed doors of the elusive quilters' den. But not on Saturday. Nay, these quilters were proud of what they had accomplished in the complete transformation of this room that most likely, at one time or another, had hosted such civilized (and scrap-free) happenings as wedding receptions, bar mitzvahs, and Kiwanis Club meetings. Events like that couldn't even be imagined in this space in which I found myself. Then, as if that weren't enough to make me wonder how I was going to be able to locate the door through which I would make my escape, they came closer. Not one by one, but as a pack. They descended upon the containers of fabric we had brought to show and, like wild animals, marked their territories.

Thankfully my friends, Gary and Ellen, one of the herd's Alpha members, fought them back and made them sit, mostly in chairs but some amid their droppings and debris on the floor, while I made my presentation. It seemed to work. They calmed down a bit and, for the most part, were docile and attentive while I told them about my work (And while I formulated in my head the idea I'm going to pitch to Mutual of Omaha for their next television endeavor, Wild Kingdom of Quilters).

All kidding aside, the way that the day turned out is what the community of quilting artists and crafters is all about. We shared our current projects and past accomplishments, told stories of our successes and failures, voiced our likes and our dislikes and happily offered our personal expertises to those who are still (and always) learning. I was on a "high" when I left there. And not only because we were able to locate the exit. What a fun day and what a FUN group of people!

Sign-ups are going great for "Party with Patrick™". All of the quilters at the retreat were really excited about it and told me they were going to find local shops where they could sign up. I'm really looking forward to this year. It's going to be something very different from what I've done in the past and it's exciting to have something so new and fresh to work on. The shop owners I'm working with are as much fun as the ladies in the Valley of the Sun guild so it looks like it really IS going to be the party I had hoped for! I hope you'll join us :)
Posted by Patrick and Team at 10:22 AM 14 comments:

It looks like the "guest" list for the party is growing! I had a feeling you'd all be up for a party too. I can't write a lot right now but I hope you'll stay and wander through my blog.

To be honest, I had to stop what I was doing because I got this photo that I just had to share right away. Looks like someone else is ready for the party! Thanks to Lynn and Bob at Country Crossroads in Florida for sending me the pic. 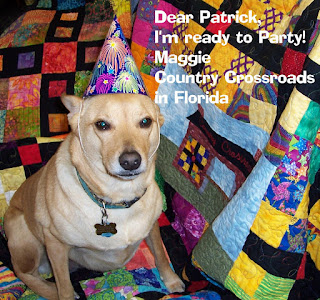 If you haven't seen the information about my new club for quilters called "Party with Patrick™" yet, you can take a look here.

Posted by Patrick and Team at 4:54 PM No comments:

I'm sorry it's taken me so long to post but it's been super busy here. I'll get to that in a minute.

But first I want to reassure everyone that I have recovered from the discarded cell phone fiasco. I appreciate, very much, the concern expressed in your comments and emails but, honestly, most of the ranting in my last entry was purely for dramatic effect. It was just one of those days and I needed to vent. To me, it's best to do it in a silly and non-violent way (no matter how inclined toward violence I felt at the time!)

Furthermore, my Christmas tree and all of the rest of the holiday trinkets and trappings are back in their boxes and my house looks like it lost a couple of hundred pounds (because it did). It's a weight off of me, too.

I am getting very close to the formal announcement of my club for quilt shops but there are all of these tiny little details I need to pull together. I'd say I'll be on target for getting a mailing out next week to all of the shop owners who have expressed an interest. A couple of them that I talked to today were ready to sign up right then and there and I really loved their enthusiasm but I have to have it all in order first. Maybe I can get sign-ups going by the end of next week...? I sure hope so.

I think it would be okay for me to go ahead and announce the name I've chosen for the club. We're calling it "Party With Patrick (A monthly dose of Patrick Lose!)™". There are a few reasons I wanted to go with that name.

My birthday is St. Patrick's Day and that's going to be the official start date so that I can remember the anniversary. (Cue crickets chirping....)
Posted by Patrick and Team at 5:46 PM No comments: