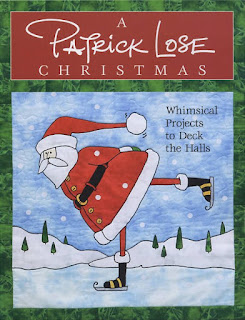 I woke up this morning, still tired, after a not-so-great night of sleep, made some coffee that's strong enough to strip the finish off of some of that horrific, black lacquered Deco furniture (it truly needs to be done), and went to my computer to check on the "stack" of email as usual. Someone had sent me a link to this review of A Patrick Lose Christmas:
Reviews

Another winning selection of quilting projects from Patrick Lose
By jenniequiltsit
Pros:
These are the kinds of Christmas quilts and accessories you'd find in the stores like Crate & Barrel or Pottery Barn...GREAT stuff. They're not the sugary sweet and overly cutesy stuff you see at every craft show across the country. These are some sophisticated but still very fun and humorous designs.
Cons:
I wish there were even more projects but it's well worth the money.
If anyone knows jenniequiltsit, please tell her she made my day! I hope you all have a wonderful Sunday...especially you, jenniequiltsit. And I hope you like my new book ;-)
Don't forget to stay updated on the latest info we have on That Dam Christmas Party retreat in July. I wish we had a bigger location because I'm afraid it's going to fill up as soon as we start taking reservations so, if you're seriously interested, watch for details so you're not left out. It's gonna be a blast!
Posted by Patrick and Team at 8:25 AM No comments:

Someone's Getting a "Partying" Reputation! 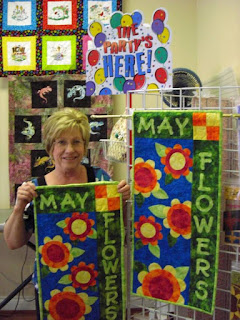 Photos and stories have started to come in from the April parties and I'm sorry I'm a little behind posting them because of all of the other news to share lately. I got a note from Rick and Linda at Little Stitches Sewing Center after their second party on April 4th. They've only had two parties and I'm already looking forward to hearing from them every month because they go all out and really know how to party. AND because they're so good about sharing their parties with us (this is a not-so-subtle HINT to some other shops out there!)

Here's the note I got from them:
Hi Patrick,
Saturday was another "Party With Patrick" day and everyone had a great time. As before, we made our party an all day event. We served a springtime-themed lunch of soup and grilled chicken salad and followed up in the afternoon with your scones and lemon curd. What a hit! Thought you would like to see the attached pictures.
Thanks again!
Rick & Linda
Little Stitches
Now you should take a look at the photos they sent. Get a load of the lunch they served! Like I said, they know how to throw a party. It looks like everyone had fun. Thanks for sharing the day with us, Rick and Linda.
There are lots of other shops out there that have promised to send photos and the scoop on their parties so...get with it, slackers! ;-) Sherry, from Calico Cupboard, sent some and I promise to get them posted soon. It looks like her gang had a great time as well.
It's very rewarding to me to see that you're all enjoying this program that I really feel is a great way to connect quilters, create new friendships and foster old ones, and to bring this celebration of our favorite pastime to the centers of the quilting communities around the world...local quilt shops!
Posted by Patrick and Team at 5:07 PM No comments: 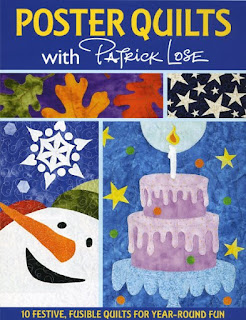 I got my advance copy of my new book Poster Quilts with Patrick Lose yesterday and it looks GREAT. It's exactly what I wanted it to be. I set out to put 10 easy-to-make projects together into a book that you could turn to when you have a few hours to spend making a fun project to hang on your wall or use as a door banner.

The instructions are super easy and most of the projects are raw-edge applique but you can finish them your favorite way.

All of the people at C&T Publishing did a wonderful job pulling this one together and I have to thank designer Kristen Yenche, especially, for making it look so festive!

Hope all is well with you!
Posted by Patrick and Team at 3:45 PM 1 comment:

As I said in my entry yesterday, I have lots of news that I'll have to report a little at a time. I've been working on something for awhile now that I'm finally able to announce "out loud".

At the end of last year, Project Linus National President, Carol Babbitt came to me and asked if I would design a collection of fabrics especially for Project Linus to be produced by Avlyn. I was thrilled to be asked and I'm really happy to say that my work on the collection is completed and the process of promoting it to independent quilt and fabric shops has begun. If you'd like to see what I came up with for them, click here. You can also download a PDF document that features many of these designs all on one page. I'd love to hear what you think of it.

While you're on the Project Linus website, take a look around and read about the wonderful work they continue to do to provide a sense of security through blankets to children in need. I'm happy to do what I can for them and I hope you'll do the same. Look for Project Linus Chapters in your area and ask what you can do to help.

Don't forget to take a look at the wonderful Boulder Dam Hotel where we'll be holding our "Christmas in July" retreat, That Dam Christmas Party, in July. We're working out all of the fun and crazy details now and will provide information as it becomes available.

I hope you're all having a happy Easter! Lauryn and Lily have spent the weekend with me and it's been a blast. In fact Lily's worn out and finally napping.

It's been another busy couple of weeks for me and the parties are in full swing. Party with Patrick™ is officially "international" now with shops joining in Canada and we're in contact with European shops as well. We also had our first Alaska shop, Sylvia's Quilt Depot, join this past week and I'm thrilled to have them on board. It's really exciting to me that everyone's having so much fun with the club.

There's so much to tell you about that I don't know where to start so I think I'll have to spread the news out in a couple of entires over the next few days. I spent last weekend in Boulder City and Henderson Nevada and had a great time. Merry and the gang at Fiddlesticks hosted the third of three consecutive weekend retreats in Boulder City. My friend, Gary, (who is also my sales and marketing director) and I stopped by for a vist and basically stayed all day and well into the night on Saturday because we were having so much fun with all of the quilters there. We spent a lot of time laughing and, after getting to know this great group, we decided that Boulder City is where we want to hold our first retreat. The town is perfect for the type of getaway we have planned and the people are so friendly, too. And, if you haven't seen any of the publicity/documentaries surrounding the builing of the new bridge, it's amazing! The photos don't give you the same feeling you get when you're driving through the construction area. It's like driving though a set from a science fiction film.

On to my news; the first order of business is to announce that first retreat we have planned. It's going to be a not-your-run-of-the-mill "Christmas in July" event. Since it's going to take place in Boulder City and held at the wonderful 1930's era Boulder Dam Hotel, I decided to call it "That Dam Christmas Party". We'll be posting info here as it becomes available. There are limited spaces available on a "first-come" basis so, if you're interested, check the info page often.

We're also having the first Party with Patrick!™ retreat in the same place in September. This will be an expanded version of our monthly parties for quilters and I will actually be able to be at this one like I wish I could be at all of the ones being thrown in quilt shops coast to coast! You can bet that both retreats will be great fun-filled and creativity-inspiring events that you won't want to miss. Dates for this one are September 18, 19, and 20. Mark your calenders and watch for information here and on my website.

I'll let you give some thought to the retreats and be back with some more news later. It's been pretty exciting around here lately and I'm anxious to share the developments.

I hope you all have a wonderful Easter!
Posted by Patrick and Team at 11:31 AM No comments: