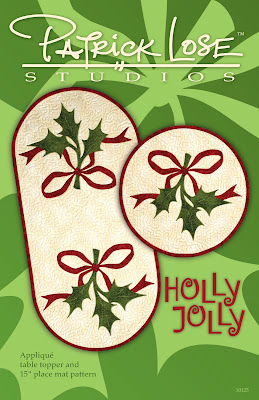 Yesterday, Gary and I had the pleasure of touring the Connecticut countryside and a lot of its wonderful shops with quilt shop owners Barbara and Cheryl from The Yankee Quilter in Oxford.

Many of the shops we visited and homes we oohed and aahed over had holly bushes in their lawn decor and I really liked seeing that. I've always loved holly and it's yearly reappearance as a symbol of this season. I was a little curious about the origins of holly being used in decorating for Christmas and did a little reading about it.

The shiny green of holly leaves in the winter and the fact that it bears fruit when everything else is dead or dormant made ancient peoples believe it had magical powers of healing. Holly was often used in the Ancient Roman celebration of the Saturnalia which was a festival held in honor of the god Saturn. Early celebrations of the Christmas holiday were based on Saturnalia. Among the Celts, holly also played a major role in summer and winter solstice observances.

Despite protests from Church Fathers, who regarded their use in decorations as too pagan, holly and other evergreens were adopted by common Christians as Christmas decorations in Roman times. In an effort to bring the pagans to Christianity, many of their symbols and traditions were eventually incorporated into Christian celebrations.

That's interesting enough but, honestly, I just like what it looks like. The deep green leaves and rich red berries of holly look beautiful in our contemporary Christmas decorations, too, and I often use holly in my own designs for the Christmas season.


Christmas Cheesecake Cookies If you like my Holly Jolly table toppers pattern, you can find it here.
Be sure to visit the blogs of the other designers/bakers who are participating in the blog hop and I hope your holiday season is off to a Holly Jolly start!

Posted by Patrick and Team at 6:02 AM